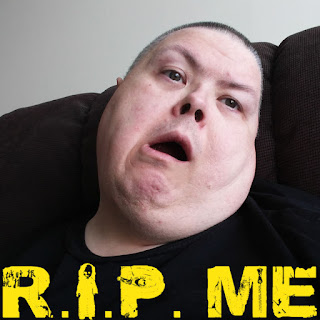 Been wondering about dropping dead. Been thinking of how and where and when it might happen. I have played so many scenarios threw in my mind this last couple of days - some where even quite amusing. For example having a fatal heart attack in a cafe and having the time to say "It's the food" on my way to the floor.

I mean we are all going to die right? So why not give it some thought in your spare time. Hell I have even joked about it while out with friends. We even sat there talking about the most messy way to die or the most confusing way to be found in. But after all, we are not your average people to say the least.

I have given thought to what is after death as well and the vast majority of my life I have thought that there is life after death. I have no idea what form it will take of course. But I am somehow certain it will continue after this body is dead. Well, if I am wrong I am not out anything am I and I will never know LOL.

There is all manner of ritual around death as well and I have looked into a lot of them. I kind of like the idea of the Zoroastian Towers Of Silence where you are left to rot and be eaten by the birds. I think that would be the best way personally. But that is some kind of no no where I be living.

I also looked into body farms where they leave you to rot to let people study the process in order to help solve crimes and so on later in life. But there are none in Canada it seems or I would have signed up for this already.

The thing that makes the least sense to me is a funeral. I don't need anything like that to say goodbye to a loved one, I can do that on my own terms alone. Sure we had one for Dad but he was extremely well known in this city by a large amount of people and well Mom did need this ritual for closure.

When Mom died, I had a viewing so that the relatives could say goodbye. I had already done that as I sat beside her watching her die. BTW I recommend being there for the death of a loved one - it does in fact bring closure instantly. Well it did for me. I was with Dad when he went to the other side as well.

Graves I see no point in as well, I have literally been to either grave of Mom and Dad once just to see the stone was in place and so on. I took Mom many times to see Dads though and stood behind her waiting for her to do what ever it is she expected out of it. She never did let go.

This part might sound crazy to some but I knew Mom was going soon and I think I experienced a visitation of my Aunt before it happened where she said she was going to take her in two days. Sure enough two days later she died. Almost to the minutes of the visitation.

Dad was the same thing. I experienced his sister coming to me in the night and saying she was taking him soon. I literally figured I was having some kind of hallucination. The next day Mom and I went to Regina to get Dad from the hospital there and take him home. Well he died of a massive heart attack in the car beside me.

Also I have always somehow known when someone I loved has died. I was no where near them at the time but I knew. This ended a while ago (6 years ago) when a very close friend died. I don't know why it stopped, but it's gone now as a few others have passed and nothing. Before that time however there was a rather strong sensation I can't describe and I knew they where gone.

I think will I know when my Brother passes? I have lost contact with him as they have moved him to a new care home and I have called them all in the city he was in and the all said "we can't give out information". The fact I am related did not seem to phase them. I sent an email to his son and never heard back. So he is lost to me and I may never even know if he dies. This I have closed his chapter of my life already and said my goodbye to him.

My fondest hope when I snuff it is that my friends will have a drink together and talk of how I helped them in this life. I have never missed my chance to do so for any of my friends. I hope as long as I live I don't have to miss the chance to help in any way I can. Anyway, enough of this - Have a good day all and keep smiling.