BIG FAIL AT UPLOADING TO GOOGLE PLAY MUSIC WITH CHROME

So tried for days to get my music library from the old days (ripped from CD) onto Google Play Music. What a pain in the ass this was to say the least.

See first off I'm using a very old PC with windows XP on it. I can't afford to replace my last one quite yet, so here it is a system from 2005 still being used. It's 32 bit and because of that the desktop app wont work. It installs for some reason, but says "not a valid Win32 program".

So I was stuck with the browser upload method. That is to say you have to log into Chrome (has to be Chrome) with the SAME email as the play account then install an ad-on to make it upload.

Well this was a pain in the ass because I normally use Chrome with a different google account. Sigh. But got it almost working.

See it takes a great deal of time to "process the music" before it even starts to upload. Then it takes a vast amount of time because of the way XP handles upload (and files). Fast internet is no help at this point.

The problem cam at first when I was uploading too many at once and it freaked out. As well for some strange reason I had several CD's split into more than one on Google Play. I had to edit them and for the life of me the tags all looked the same, but if I copied the album name from the one and pasted it in the other it put them in the same folder. And yes to my eye there was no difference in the names.

So I took the advice of a person who has done this before and spent 2 days uploading a few CD's at a time. Well this worked for 2 days then just up and stopped working. I tried everything. I uninstalled the extension and reinstalled it. I rebooted the computer. Nothing fixed it from stalling. I even tried to upload a different folder and it still stalled and would not upload.

At this point I just gave up. I have the other 1000 or so songs on a jump drive and set aside. When in the fall I have the money for a reconditioned PC I will install the desktop app and try again. I am not wasting any more time with the Chrome extension.

Why in the hell they don't have upload as part of the app on the phone I will never know. I mean I could cable over a jump drive and upload from the phone that way, but nope. The best thing is, people have been asking to be able to do this for years.

Another thing is, there is no way to stop the upload when it stalls or you just want to stop it for another reason. No stop button. You can bail out of the browser all you want, when you come back to the Google Play page, it starts trying to upload again. You at this point need to remove the extension to kill the que.

What a pain in the ass this all is.

BTW at the very top of this page is a CD I got on Google Play and there is NO thumbnail for it. This was right from the start - just had no album art. On the play store it did but not after buying it for some reason. Yet several of the ripped CD's seem to have album art showing up for no reason. Most of them do not show any (even though they did on the PC).

All in all I have to say, unless you use the desktop app (music manager), don't even bother to try and upload with Chrome. And it has to be Chrome, it is not supported in any other browser. 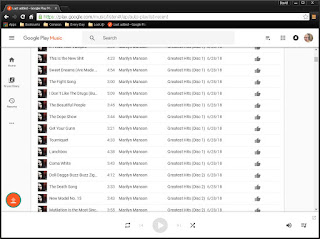