ANOTHER MOTH OF GOING VEGGIE 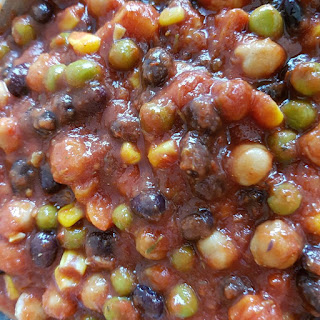 Another month of twigs and bark for me. It has worked all month well, so I'm on the bean mix again this month. Was going to go back to chicken, but I'm still on this stuff.

I take vitamins to supplement the lack of meat (yes it has good things in it) in my diet. You also have to eat a great deal of beans to get the same amount of protein as a single chicken boob.

I was hoping to get all crushed tomatoes this time as you see in the photo, but they did not have any at all out on the shelf and I did not have time to have someone go get me a bunch out of the back. So diced it is. It's less tasty, but with the right spice it's all good.

The thing is, when you stop eating meat and start to eat all veggie, your body does things different. See there is a great deal of fiber in veggies and that all comes out. In my case 3 times a day on average, so more time in the bathroom.

But I have to say that my thinking is more clear (I still get brain fog just not as bad) and my joints feel better for some reason. I also have more energy and this is a blessing because I literally have very little energy most days due to illness. That being said, I've been told others had the opposite effect and they lacked energy.

On a side note I am less prone to depression on the veggies and have less anxiety. I have not one clue why. The other thing helping with anxiety is the Hemp Oil I'm on. Omega 3 and 6 seem to lower anxiety. It also lowers the pain I'm in most of the time.

There has been issue taken in the past that says the lack of meat in the diet of a growing child slows the development of brain growth. There have also been studies that say you can compensate for this with supplements.

All I know is I'm losing weight at a nice slow pace and keeping it off for the most part. Sure I fall off the cart now and then and go up, but most of the time I go down. It's over 150 lbs off so far and counting. I also feel a lot better most days (today is a bad energy day though).

It's not cured my illness by a long shot, but it seems to have helped it. I also notice that the bean diet seems to be catching on. I have not one clue where I found it in the first place, but I'm glad I got onto it. It's made a world of difference.

It's also rather a lot less money. As in $50 to $80 less a month. I'm averaging $150 a month right now and I used to be averaging $210 a month with the chicken. Then again I been hitting sales a lot this last couple of years.

I could actually reduce the salt intake and save about %30 more on the beans if I got dry, but I don't want to have the time spent in cooking dry beans. I do it up in 3 or 4 day batches and this takes me all day as it is. If I went dry beans, it would triple the cooking time and I would have to cook every day instead of for several days at a time.

I also tend to get frozen veggies and not fresh as I can't afford to have fresh ones - they are just way too much money. But if you can afford them, fresh is 50X better for taste. Freezing kills a lot of the taste in veggies it seems.

In any event, if you like look into the bean diet and so on. Make sure you get enough protein in your diet and the vitamins you need. Enjoy and keep cooking. BTW there are a lot of ways to go veggies that are not as boring as this, but you need the money for that and I don't have it.

Peace and love to you.