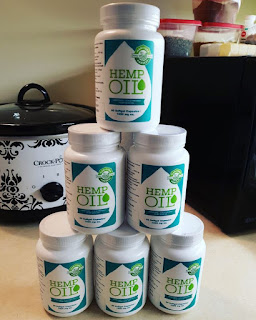 So I saved like $56 and change on my last shopping trip to get food for the month. I used it to get 6 months of Manitoba Harvest Hemp Oil.

It seems to do wonders for the Fibro pain even though in the last couple of moths I have had a couple very bad flairs. That being said they are not nearly as bad as I used to get often. So I can say it's helped a lot. As well the day to day pain level is only about 40% what it used to be in the past.

It's been an expensive month for me as there have been expenses I don't normally have and I'm trying like hell to put money away for things I will need to get in the future like a new TV and a reconditioned PC.

On my income level it's hard to save money unless you don't have things like Cable TV and never do anything fun for yourself. Being that would leave me with nothing to do all day every day, I'm willing to put up with not having money rather than not having entertainment. There is always a trade-off to be had it seems.

That being said I have been stupid with money for the past year or so as well, spending a lot more on things for pleasure than I should have. This has lead to me not losing the weight I should have lost as most of these things are junk food related. Pizza is good but it's also the devil.

In any event I don't need to order any hemp oil until the new year now. But I will need to order some more vitamins and 81mg aspirin soon. I find it a LOT less money to get the 365 day bottle of aspirin than to get the smaller bottles. That and ordering it from Amazon often saves me a small fortune rather than getting it in the stores. Vitamins on the other hand are about the same on Amazon as in the store when on sale - so it's a convenience.

I also decided to spend $22.64 on a new micro-SD card for my phone as I don't really trust Lexar anymore. 2 of them have failed on me in the past 3 years. That being said the last one to fail is supposed to be replaced, but who knows. If it does show up I'll toss it in my old phone as now and then I use it to do a bunch of videos in a row when doing mass tag videos and so on. The old phone also takes much better photos.

Speaking of old phone I only changed to the S7 from the G4 because an update to it seems to have broken the settings and you can't edit the app manager settings as settings will crash if you try to. there are a PILE of help pages on this on the net and not one of the things worked for me. So it's about done. I just use it for playing music and doing video and the rare close up photo of something (does amazing macro shots).

Well this wondered off topic, but oh well. Have a good one all (BTW everyone in Moose Jaw says that).