PATHS DIVIDED (A STORY OF 2 BROTHERS) 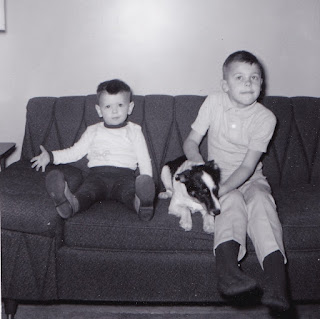 I was born to a mother who was far too young to have a child. The father was far older than her. But I don't have any recollection of them at all. Before my first birthday I was taken away from them by the government and soon after adopted out to the people I knew and loved as my parents.

I had a brother who was also adopted. He was five years older than I wan. He also was very much a bitter person and never grew past the need for self pity and self destruction. In fact he made of life of making his own life and the lives of those around him miserable.

My early memories where of playing with my brother in the yard as there where no other children on our block. It was a happy time and one filed with love. The family was hole and we where there for each other.

I don't actually know when it changed or it happened so slowly I did not notice until he was a very different person. But sooner or later by the time I was in grade three he had started to be very much in need of being the center of attention and the desire to please himself even at the cost of others feelings.

After that he was never the same person as I knew in the very early days. He was the person he would be until the dwindling days of his life. A path chosen or perhaps forced upon him by his own subconscious mind. I don't know. But I do know he was a user and an abuser after that.

I remember him calling me stupid a lot. This in my teen years made me wonder if he knew what the term meant. I by then was obviously more intelligent than him. I was also a lot better at fitting in with people even if I had the desire to isolate myself often. I also had empathy, something I think he went to the grave not knowing.

He went off to the military when I was in high school. He then found a wife and had a child with her. This is not the start of a nice story, but the start of a sad one. As in everything in his life, when it was good he had the inward desire to destroy it and did a darn good job of it.

See he was not a violent man but in his way abusive as hell. He would use angry words and threats to push people around. This was the inevitable undoing of his marriage and his fatherhood. The son and step son where not raised by him as he was well and true unfit for the task.

See by this point in his life he was in love with one thing, the bottle. He was also by this point a true addict to pain medication. The combination of strong pain medication and booze was potent. I remember one time he was visiting Mom and she could not wake him up as he had consumed the best part of a bottle of Tylenol 1 and a 26 of vodka.

Several years before that Mom against my advising her not to had tried to give him a chance at making it in this world. She signed a loan agreement and got him a great deal of money. He then preceded to drink and spend the money at a fast rate and never managed to make a go of it in his business.

He tried several things to make a profit the entire time running up a vast debt to many people. All of this was on the head of my Mother when he decided to run off to Alberta and hide from those he owed the money to. Mom had to sell everything she had and pay out all but a small amount of her savings to pay off his debts.

She was devastated by this but later on forgave him and tried to help him again. This time only with support not of the monetary kind. He visited many times after that but in the end when Mom was in the hospital and later in the care home he never came to see her. Not once. Then again neither did his son.

When I called him to say Mom was dead it was quite possibly the only moment of regret in his life. He was speechless for a time and sad at her passing. I think this all to late in life encounter with reality changed him. Softened him.

He not all that long after ended up in a care home himself and desperately tried to get compassion from me. I gave it as it is how I am. He ended his days in the system and after they moved him I lost track and could not contact him. It was eight months after his death his son got hold of me on messenger and I found out for sure he was dead, although I knew it some how.

This makes me think a lot really. Are we set to live a life we make for ourselves at an early age like my brother did, or can we change like I did? In my 20's I was angry at the world but I overcame it to become the loving person I am now. So I guess that is my answer, we need something to case us to want to change and we need the desire to change.

I guess some will find the path and others will never find it. Some like my brother will find it far too late in life.

I conclude with the fact that I forgave him a long time ago and felt for him. The anger was short lived and replaced with the knowledge he was in a self imposed hell. I have to wonder all the times he could have stepped onto the right path, why he never did till the end. But I guess all we can ever know is how we came to the path we are on and never know the reality of another's struggle. All we can do is be there.