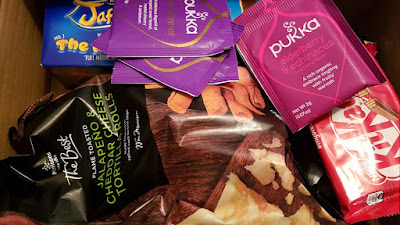 So a nice YouTube friend sent me this box of snacks. 4 of them where sugar based yummy goodness. BUT you see my Fibromyalgia don't like sugar much. Now and then I will get away with it, but most of the time I get a mild flair out of it. 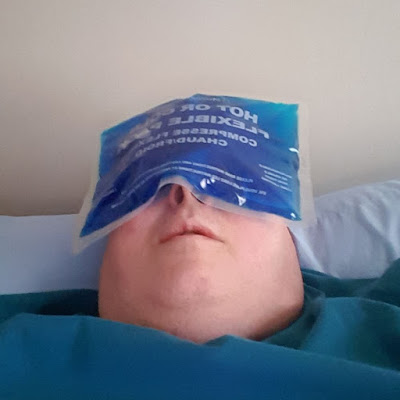 This time however it was the worst flair I had since I started in with the Hemp Oil Pills. Well it topped out at about a 7 and I was thinking if this gets worse, do I bother going to the ER?

See the thing is after a 7 it's hard to take the pain, but it also typically only lasts 4 to 6 hours when I flair. Being that the peek is in the middle of that, a 6 hour wait in the ER would be pointless, as I would already be over it. So almost every time I have just left it and took the pain.

The thing is there is literally only one medication that works well for me killing the pain and that is Tramadol. See that stuff is OK in the hospital as it will be covered as I'm given it in the hospital. As soon as the give me a scrip for it, the stuff ain't covered and over $3 a pill up here.

Being that I would literally only ever need this stuff once ever 6 months, I would not have justification for exceptional drug status and having it covered. So I would end up paying a bunch of money for pills I would not end up using before they expired.

See the problem here? I've tried a great deal of medications with my last doctor as he was willing to generally try anything (new doctor not so much). Nothing has worked well.

The only thing that did almost work was Codeine and it had to be at a dosage that left me slightly breathing laboured and so out of it I could not do much. So F*** that noise. I kind of like to keep breathing. Not to mention constipation.

Thus me laying in bed with a cold gel pack and hopping it don't last long.

LOL I remember the doctor giving me like 240 pills of T4's and wondering how the hell I'm going to use them all. The thing is after I realized they did almost nothing and my body kind of hated them, I ended up taking them to the drug store for disposal. I may have had 10 of them tops by then.

This is why I am glad the Hemp Oil Pills seem to cut the pain in half. Now if I could afford the Chia seed pills it would be double the effect and I would be almost pain free, but they are expensive.

I know "take twice the dosage" well, it don't seem to work that way. I have tried and it seems to do nothing more for me some how. So I'm just happy for some relief.

BTW this is the only flair over a 5 I've had in the entire time I been taking the Hemp Oil. BUT I've had cluster headaches that where a solid 8 for a couple of hours. Again not worth going in as it would be over by then and NO over the counter meds come even close to fixing this.

Oh and don't feel sorry for me, I knew this could happen and eat it ALL in a 4 hour span - so it's ALL on me.