THE ANNOYANCE OF ANDROID 8 ON MY GALAXY S7 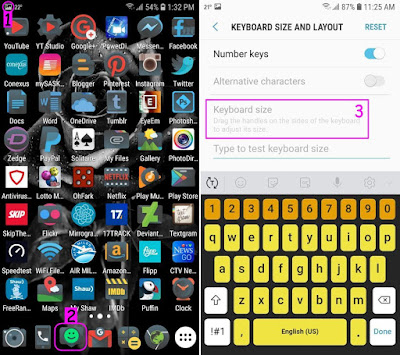 OK first off after updating to Android 8 on my Galaxy S7, I noticed that it now notifies me that I have done a screen capture. See you have to press the power button and the home key at the same time to get it to do this, so it's not like it's "OOPS I did a screen cap again". So why do I need to be told I just did something I realized I did. It's like if you got a cup of coffee and the maker said "You Have Coffee".

Now number 2. See that nice icon there? Well it's NOT the default texting (SMS/MMS) app. So why did I install this thing? See I WANT (like 99.8% of people) to know who is texting my by the notification sound. Well 8 shows up and Samsung things you no longer need to have a custom notification sound for each contact. What the HELL where they thinking on this one?

Now over to the keyboard settings. You may notice have very much space the massive keyboard is taking up. I NEED the high contrast keyboard as the medium gray on light gray keys are very hard for me to read. AND I used to be able to resize it so that it's not taking up a vast amount of room. Sigh - no more. You can only resize if you are using the normal keyboard.

Not shows is the fact that it put these guitar pick shaped boxes around all my icons. Who the crap wants this? There is also no option to have the standard icons on my launcher and turn that crap off. All I could do is change the shape of the very unwanted box. So I literally had to install an icon pack to get rid of the freaking boxes. See if I did not have Nova installed instead of the launcher it came will I'd be out of luck.

Settings... Well it reset almost all my settings for some freaking reason. It's like someone from Microsoft was programming for them. Why in the WORLD are my settings saved to the cloud if when I update are all the settings going to be changed to what Samsung things they should be? This took a lot of time I did not need to be spending to fix.

One very annoying this is, I have Onedrive installed and the camera roll turned on. I WANT THIS and I use it every day of my life. So I had it set to pop up a notification when a new source for image upload shows up on the phone. WELL I also had the sound turned the hell off as I don't want the thing endlessly making sounds at me 24 hours a day. Had to turn it back off and it's NOT obvious how to do that.

Literally everything I have set to notify as a popup or a badge now was making that freaking sound. So into the settings of 50 apps I go. Sigh. The hell was that for?

Then... There is this thing that was popping up (thank GOD it seems to have gone away) in the top left corner. You see in the screen cap I have the temperature displayed up there. Well something for over an hour was popping up next to it and then going away so fast I could not recognize what the hell it was - I still have no idea what the hell it was. This was extremely distracting.

Here is another one for the useless pile. I upload my Vlog to YouTube and switch to the Studio app to set the custom thumbnail for the video. It pops up a notification saying that YouTube is now running in the background. You don't say? I'm sure I had to be told an app I just switched to another app from is not the one I'm using and it's in the background. What is this needed for?

The ONLY thing I like is it don't seem to be slowing the phone down any. It is responding the same as it used to be. The fact that I now have LESS memory on it is another story I guess. Every update to everything EVER seems to make them bigger. This is why new phones have so much dang storage on them, you need it.

If I did not have a memory card in the phone I would run it out of memory in short order doing video. Oh well, rant over.