CHEATED ON THE DIET AND COUPON CODES ARE OUR FRIEND 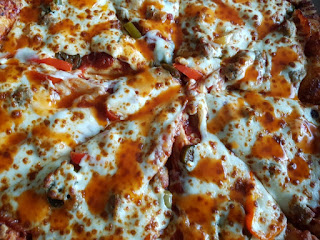 This is my cheat for a while. It was a 4 topping pizza with extra cheese and covered in extra hot - hot sauce. There was Pepperoni, Bacon, Jalapenos and Banana Peppers on it.

I will be short on cash again this month as I have extra money put on the bills to carry over to next month as a credit (to get a reconditioned PC). I have an event on the 18th I need to save $40 for and I owe $20 to someone. So in all not much will be left over. Although it will be enough to have some fun with now and then - just not a lot of it.

My saving grace is that the beans and tomatoes are on sale for a good price right now and so is coffee and so is the veggies I get. So I'll end up saving a bundle (not sure how much but more than $50 I think. This allowed a bit extra to go on the bills other than the $100 that was donated to me a while back (it also went on the bills).

In any event, it was very good. I also went over and got a nice salad to celebrate a milestone in daily vlogging. but that won't mess up the diet like the pizza did. I may if I'm lucky end up with a slight loss next Friday, but I'm expecting to be up like 2lbs... We will see.