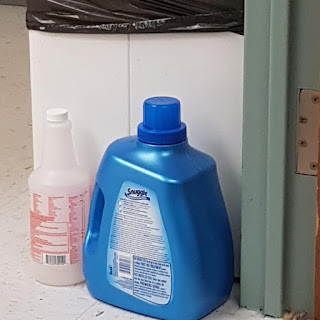 So was doing the washing last night and had an attack of whatever this is again.

I first get a headache, then my neck hurts, then my shoulders, then my back, then my chest. This is typical of my Fibromyalgia flairs. But with it I am also getting dizzy as hell and a very upset tummy.

I've told the doctor about this and he did a couple of tests are ruled out it being my brain or my spine. That is where he stopped caring. After all suffering terrible bouts like this is not something a doctor in my aria seems to care about.

Yes if I had an option of switching to a doctor who would actually try and get to the bottom of this I would in a heart beat, but that is how it goes in a small city. See the Saskatchewan government as asked doctors to lower costs and this is the result - less tests and just allowing you to suffer.

I actually went to the point of hitting the floor last night. I grayed out - I did not pass out all the way, but fell down and went splat on the floor. I am just glad I did not cause myself a head injury in the process.

I don't know if this is just my Fibro expanding to have some extra facets or not. I am hoping it's not something worse causing me to flair when it acts up. I will be mentioning it to my heart doctor when I see him next month this is a certainty.

As soon as the wash was in and I was sitting down I started to feel it. It got slowly worse until I tried to fold my stuff then splat I went. I'm feeling the same thing right now just to a far less extent.

I'm also getting cold as hell when it's actually hot in here. I may ask to have hormone levels tested to see if I'm not up to snuff - it would be the simple explanation. I don't actually see my GP for 5 more months and I'm sure he will be pissy if I make an appointment just for this - sigh.

After all he was the same doctor who got mad at me for asking to be referred to home care for my infected wound as I could not care for it properly at home. Home care is a misnomer as you go to them most of the time and in fact I did go to them. But it was needed.

It's amazing in a land that is supposed to be taking care of it's people you have to argue and fight with a doctor to get proper medical treatment.

I have to say if I hit the floor one more time I'm going to go in and get pissy right back at him if he does not seem to give a shit. I honestly think he has a problem with us poor people on disability or welfare recipients. I have heard all kinds of other people say how good he is and I have nothing to prove he is even adequate.

Then again we have an ER that tells you "it's the flu" and sends you home when you have a strangulated hernia and there is a possibility of it killing you. So what the hell can I expect in this city?

I've had several other doctors over the years and I can say with a certainty that only one of them was a great doctor and only he treated me with respect and was not all bent on ignoring what I have to say. All the others just passed off what I told them and ignored me.

I'm rather certain I'll be ignored to death just like Mom was. They kept telling her "it's a lung infection, take this and go home" - well it was lung cancer and by the time they figured it out it was far too late and she was stage 4. So this is the health system I have to deal with in Moose Jaw it seems.

God I've talked to so many friends and they have the same thing to say, "they ignore what I tell them". Sigh. I guess this is the price of tax payer funded medicine.