I ADORED MY COMMODORE 64 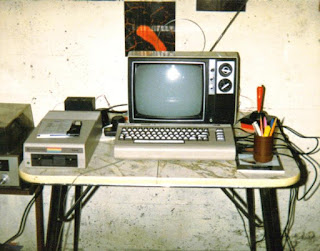 I did adore my Commodore 64 in the day. In fact I had it for many years. Some people I know still have one and play it from time to time.

This photo was in the early days, before I had hundreds of games for it. In fact at this time the only games I had, I typed in from "compute magazine". When I moved up to the wonderful world of a windows box I gave a large box of them magazines to a friend. I am sure he never used them and they are wasting space in his basement to this day, but he wanted them.

I actually wrote several educational games in the day for the thing. They where simple basic programs but did the job.

It's amazing to me that a single icon on my smart phone has more resolution that this computer had - but in the day where where amazed by it. Also having 16 colors was the cats meow at the time, now we have millions of them on our devices.

I had a memory expander and a super snapshot cartage for it. I modified the expander to have 2mb of memory and this was something of a wonder back then. The disc drive only had less than 1mb of storage on it and I can't off hand remember how much but it was single sided and you had to notch the disc to use both sides and flip it.

A later modification was making it have a stereo SID chip (sound interface device). With the use of "sid player" you could play a great deal of songs on it that where made and distributed by every day people over the BBS systems.

I remember the first time I heard low resolution digital voice on it. I was like "WOW". LOL. Now we take that kind of thing for granted when playing a game - that was vastly better music and graphics.

I am amazed to see that there is still a market for this computer and you can get a few clones of it that have a bunch of games with it and so on. Heck you can get an emulator for your smart phone to play a bunch of old games on it. I used to have an emulator on my PC and played a few games for old times sake.

I also started to do digital art on the thing with a program called GEOS (Graphic Environment Operating System). There was a very small editing window on it and you could make a then full paged image with it. That was at a very low resolution and looked like crap in today's world. I wish I still had the images I made though - they where lost in a HDD crash years ago - before I knew to back up everything.

Oh yes. Text adventures. I remember playing them for hours at a time. You can still find them on the net and play them if you really want to. It's like a different world as it's so limited and you have to imagine the scene as there are no graphics. Hell we even made a few ourselves in the day.

Then there was "battle chess" you could play with a friend over the modem (using a phone line). We had a hacked version of the game that was slightly pornographic. We used to play in the middle of the night as we both lived at home and it was not our phone line LOL.

There was also "knight games" and we literally got cheap joysticks in bulk to play this game. We would destroy a joystick every weekend playing this thing LOL.

Ah those where the days. Getting drunk and playing video games in ultra low resolution in your parents basement. HEHE. Dad even played a few times as he liked the war games I had. It's actually amazing how involved some of the games where for the very limited amount of memory you had. Anyways - keep smiling.