MOMS LAST MEAL WITH ME 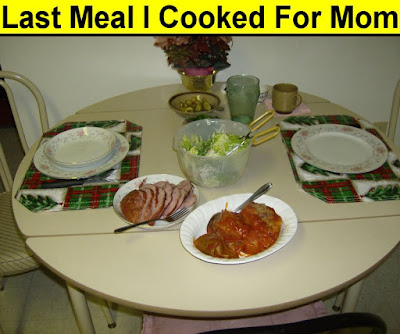 The next day she went into the hospital and never came home. It was a struggle to get her into a home even though she was terminally ill. The medical system here dropped the ball big time on this one. I should have taken it to court, but I never did - I did not have the strength and she was going to die anyway. They kept telling her she had a chest infection and giving her pills to take and sending her home. The entire time it was actually lung cancer and by the time they realized it, it was far too late.

She lasted about 6 months in her apartment before this dinner (Christmas dinner) and then went into the hospital the next day. It took several weeks to get her placed and that only happened when I had a great deal of people send emails to the minister of heath.

About 2 years in the care home later, she was a shadow of the person she used to be and was less than 80 lbs. She had lost her ability to talk and later her sight. Her mind went as well and she spent the last 3 weeks in the dark scared of things only she could see and hear.

I sat by her side in the last hour or so and watched the life slowly fade out of her. She had been unresponsive for 2 days before that and we knew the time was short. It was a great relief to see her pass. Her suffering was ended and she was with her loved ones on the other side.

Honestly, I did not cry until I had it all settled and she was in the ground. Then I cried for days. It's been a bit over 6 years since she died and I miss her every day. I went to see her every day in the home. Even on days where my Fibromyalgia had me in a state I could hardly walk I went.

I almost never saw another person visiting a loved one. That in it's self made me deeply sad. Most of the people in there where stored away to end their final years alone and isolated from their loved ones.

I honestly want to die quick so I don't end up in a place like that spending hour after hour, day after day waiting to die; the entire time being alone.

A secondary loss in this mess was that the rest of the family I had literally treated me like I was dead after Mom passed on. They never talked to me again, not one of them. My friends are close to me and are my family now. The care more about me then the people I'm related to.

One more thing, there was lots of help for Mom in the end - but for me there was nothing at all. The depression and physical effects took their toll on me and there was no help at all. No one came to my aid. Years of taking care of my Mother and her affairs was never compensated. She was grateful I know that, but none of my family ever said a word to me or helped even once.

My brother had many years before gotten Mom to back a large loan for a business he literally drank away. The tens of thousands of dollars he owed was left on the hands of my Mother and she had to sell her home and give her life savings to pay for his debts.

I ended up with a few new things from the insurance money and a bit of help to a few of my friends was given, then there was nothing. Now I am living in social housing and a small amount of disability payments from the government of Saskatchewan. But at least I have enough to have cable and internet to keep my hours filled.

This past Christmas (2017) was the first time since the meal shown above that I was not deeply sad on Christmas day. It will always be tainted by the memory of my Mom needing emergency assistance the next afternoon and the fact that she could not remember the meal we had the night before.

The other day I wished I had recorded some video of her. I can't remember her voice now, it's gone from my memory. The most vivid memories now are her slowly fading into a husk of what she once was. The most vivid of the memories was when she forgot who I was. It will haunt me to my last breath I am sure.