SHOPPING CART IN THE HALL 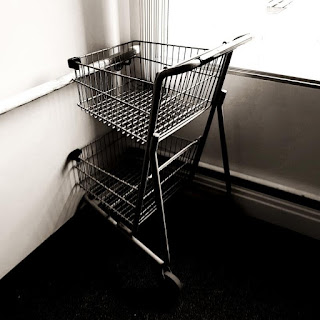 Yeah, the dude down the hall leaves the carts in the hall way. He used to leave them down by his door then he got told to knock it off. His response was to leave them by the elevator. I literally think he does not understand that he should be taking them back to the store.

We do have carts to use here to gets things from the car or cab to your place and so on - but this is a Co-op cart. There seems to be several of them in our garbage room as well. Sigh. It seems more than one person wants to save the just over $5 to have delivery.

The thing is I am making less than at least half the people in here and I can afford to have the delivery. I also tend to do it all at once for the entire month. That way I don't have to go out. But it's simple for me - I have the same boring stuff every day of my life and it all fits in the freezer and the cabinet. People who want variety I am sure have issues with getting it all put away.

That being said, there is no reason to not take it to the garbage room with the other carts. This is just laze. Speaking of laze, the drywall dust is not cleaned up in the garbage shoot room at the end of the hall yet. It's been what? Almost a year now? They don't do the halls that often as well - thank God it's not bad though.

This all being said, I am still glad as hell to be here. This is the nicest place I have lived since we all where in a house together when I was a young one. I've been in some hellish places with people you should not be living next door to. This place is filled with friendly people (even if some are lazy) and is well kept up for the most part. Yes it's not like new, but it's well kept.