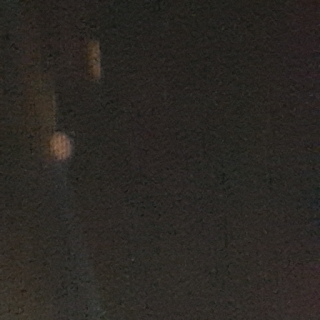 Honest to God here I am tossing recycling in the bin at 9:30 PM and there are these 2 orbs of light in the sky, so I whit out the phone and take your typical crappy UFO photo LOL. I have no idea how I thought it would come out well in the dark and hand held, but at least you can LOL at it. After the shot was taken they moved to the south and out of site rather fast. I got not one clue what the heck they where actually. But at least I got an average photo of them HA.

BTW there have been a lot of UFO sightings around Moose Jaw in the last 10 years as I have been told by several people now. Some actually claimed to have seen flying saucers up close over their farms. A husband and wife I talked to both said they have seen them moving slow and close to the ground many times in the last 10 years. I kind of wonder why in all that time they never took a single photo, but oh well. One fellow said it was the provincial government spying on him - so he was the most credible witness I have talked to.

Several of my friends have seen lights moving strangely in the sky as well, while camping. When I was in my early teens a friend and I saw a cigar shaped craft fly overhead slowly then just up and vanish. When we where watching the fireworks many of us saw a flying saucer literally just like in the movies that moved over us then just vanished. It was glowing orange BTW. One fellow had a camera in his hand and did NOT think to take a shot of it.

I have no idea what any of these things we say where and I'm not actually willing to say they are from another planet or another dimension, all I am saying is I got no clue. So keep an eye on the sky.