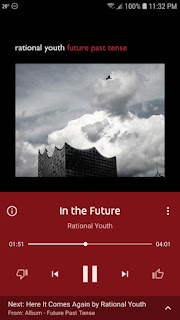 One of the big selling features with YouTube music for me is that they have a very large number of songs and videos to enjoy. I've tinkered with a couple other services that friends have and both of them did NOT have Rational Youth at all. Being this is a band I enjoy a lot, I would miss it.

I'm 100% going to be keeping the Premium version of YT Music. It just is a good deal for me being it has all these songs no one has heard of that I like and the interface is clean and easy.

There are a few bugs right now, for example subscribing on YT music sometimes puts the band on your YouTube feed as well, and well - I don't want that - I want them separate. The other thing is, play lists are completely shared between YouTube and YT Music and that is a bit of a piss off to me. The limitation of 5000 songs per list might be OK for 99% of people, but I have to think there should be no limit to the number of songs or at least be 10K. Then there is the interface freaking out sometimes, it will had the wrong information on it now and then and when you hit the info button you get an error until you hit it a 2nd time, then all the right info seems to come up.

I am a big fan of the algorithm they use to select songs for auto-generated play lists though. It's awesome almost always. But once again nothing is perfect and now and then you will get a song that just does not fit in the list LOL. But if you do a lot of video watching on the parent site, you will know how recommended videos don't always have anything to do with what you like.

I also swear that there is better dynamic range on the music after going Pro with it. This could just be my brain playing tricks on me though. Would like to know if anyone else noticed that as well.

The ability to play songs from a video without the video playing saves bandwidth as well and is a feature I like. It's also only available on Premium. Other features of the paid service are that you can have it play in the background and do other things at the same time on your phone or tablet. Heck the free one ever stopped playing when you shared a song to social media. Not to mention the longer you listen the closer together the ads become until all the sudden they are before every song - paid has no ads.

It's all keyed to make you pay for a subscription after all. But I am actually willing to do that and have been shopping for a music streaming service for a while now. I chose YT for the nice interface and the vast amount of songs and videos you can enjoy. Hell some services have a 1/6 the songs that YT does. Also a couple are more money.

Well anyway, this might be the last time I go on about this service, so enjoy having me NOT talk about it LOL.