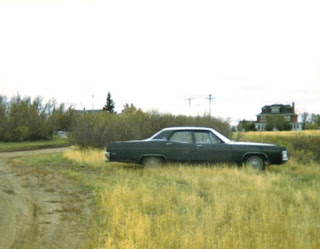 It had a high output 302 in it and did not go all that fast though. It was a heap of a car but I managed to drive it thousands of miles in a trip one time and not get stuck in the deep south of the USA before getting back LOL. I had it for some time (no idea off hand how long). It served me well and then I got a newer car and sold it to this nice lady. She promptly forgot I told her to keep checking the oil as it burned oil. Well she ran it dry and ignored the light on the dash and after so many years of this car being useful, she killed it.

I can't tell you how many trips to Regina I made in it (I live in Moose Jaw). I put at least 25K on that car over the years. We used to fill it up and drive all night. It had a very large gas tank you see and even in the day when it was less than $0.30/L it took $60 to fill the thing. You did end up driving over a month on that though.

I did a lot in this car. I still desire to have one like it for some stupid reason. I would however if I won the lotto NOT get one. Instead I'd more than likely not even get a car. I've not driven a car in like 12 or 13 years now and don't have a license anymore. I do miss the freedom of it though - but not the expense of it.