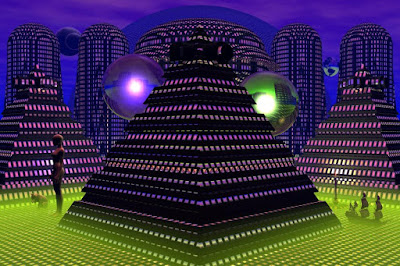 Called this Acid House Effect. It's a si-fi type cityscape with a few out of place things. Most noticeable is the woman standing there with her cat. On the other side is a toy ship and a candle. In the middle near the top are two lit up orbs with the reflection of the Twin Towers (a tribute to 9/11). The twin towers can not be seen in the image just in the reflections on the orbs. There is a planet on the left with a large moon. To the right is the earth but not quite the way it should be. The fog appears to be glowing but gives off no light. This was made in Bryce 7.1 pro. The woman, ship, candle and cat are items from Poser imported into Bryce. I went to the trouble of placing a light in the candle flame so it gave off light like a candle (yellow light) but it ended up a bit lost in the light coming from the orbs. The city elements are all just simple shapes with some boolean elements. There are 3 light sources and the moon light (moon is not visible).