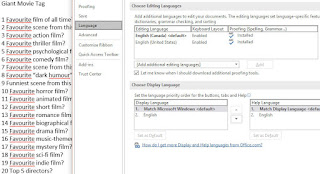 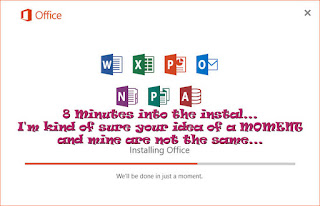 OK wanted to change to Canadian English so I could actually use the spellings I grew up with. Just change the default they said, it's easy they said. Well that did about nothing. You can see in the top screen cap, that it was set to Canadian English and it was still marking the Canadian spelling wrong.

Well First I read some place to uninstall office 365 and reinstall with Canadian English as the setting in instillation. Only thing is there, there is ONLY English not a regional setting.

So I had the idea that maybe for some stupid reason the Canadian language pack was not installed. So I went looking for that in the settings and NOPE it was installed. Well I had to remove it and re-install it.

Here is the kicker, it tanked in the download and I had to do a hard reset to clear it out. Then of course it would not even start the download and I did reset 2 then 3... But on try 4, the dang thing installed and POOF I can use the spellings I am used to now.

This was far too much work and what the told me to do did nothing. Kind of wonder what the hell was installed in the first place being it said it was installed. But oh well. At least it's working now.