Google Programming Not So Good At Times 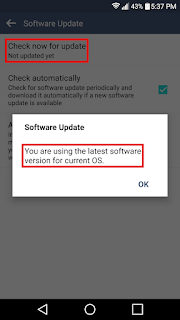 LOL OK at the top is says "Not updated yet". Yet when you tell it to check for updates it says you are up to date. HA. that could not possible be more confusing unless it told you your phone was a banana. Make me thing for a moment then I remember these are the same programmers that gave us YouTube and the cluster of crap that the interface over there is.

I mean on YT the number of comments it says you have is never the same as the actual number of comments if you count them. I have had it tell me there are 5 comments before anyone has actually commented. Being that this bug showed up BEFORE they re-worked the comment section and it's still there tells me something.

I had to really love the time that every browser BUT Chrome worked with YouTube. HA - this is a browser that was designed by the same company. Got to wonder, is this how they lost over a billion in one year?

I have 2 channels on YouTube that I actively use. One of them only for my tags. I don't make a penny of of either channel. I don't put ads on them. But I could if I wanted too - at the time it was the only way to get certain things. Got to LOL now because it has by it's self turned off monetization on my tag channel. I would have to re-enable it if I wanted to use it. HA. Being that both channels are linked, how does this work?

Getting back to the phone... It updated google play services one day and DANG it's about fecked now. I can't go to the settings and then apps and change things. As soon as I select an app POOF it crashes the settings. As well I can't edit admin privileges on the phone for the same reason. Good programming that... Sigh and it's a long way before I get a shinny new phone with Android 7 on it.