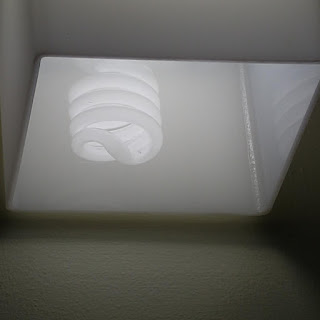 Yeah I know... It's a light-bulb. Well in Canada we can't get the incandescent bulbs any more. If you happen to actually see one in a store (and I have a couple of times) then the store is in violation of environmental laws.

The light in my hallway went out. I was told the maintenance guy and he said he would do it the next day.

I went and did laundry. I never come back up to my apartment while it's washing and drying. Instead I sit in the "reading room" and play with my phone. Normally I watch vlogs on YouTube.

This time around he happened to come in and see me sitting there and we talked for a moment then he was gone. 5 Minutes later he came back with this CFL bulb. I put it in the hall. Well it claims it's a replacement for a 100 watt bulb. All the lights in here are 100's. It lit the place up like daylight.

Not only was it more than twice as bright, the light was way more white. The old ones are rather yellow in comparison. My experience with CFL bulbs in the past was that they where kind of blue and flickered a bit. This does not flicker. The power supply in it must be more than 60 hrz or some how they have made them not flicker another way.

In any event, I want more of them. I moved it from the hall to the living room as I wanted more light in here. Now when I do a late night after midnight vlog, I have great lighting for it. It's actually better light than in the day when the sun is over-lighting me from the big window I have.

In any event I am now wanting the others to die so I have the opertunity to replace them. It's also NOT a harsh light even though it's bright. It's rather soft light.

The photo is of the lamp it's in and the reflection of the bulb on the back of the lamp. It's right over my computer desk off to the right side of it. It's a slight reach because of the desk but not bad.

I have been looking up LED lights. I wish they had those instead as they don't have the problems of when you put a CFL in a bathroom. They also tend to last a very long time. But they are more money so I doubt they will get them. They seem to only see the short term and not that they will save big time in the long run.