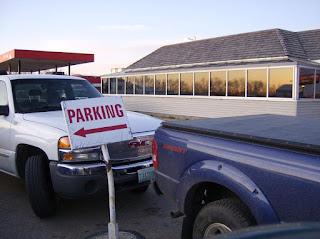 Pulled this out of the archive and may actually have posted it on the blog before. Just got to LOL about it though.

This is extraordinarily typical of Moose Jaw parking. It's to the point that if I see a handicap validation on a car in a handicap spot I stop walking at stare at it for a moment. The majority of the time it's just some twatt that does not want to walk far. Either that or they think being a total asshole is a disability of some kind.

There is a spot 3 blocks from where I live that has a strange intersection. Well you have to get over to the right against the curb to go strait from there. You have no idea how many times I have seen someone parked in that lain. There is a doctors office right by it and they park there and go in for an hour or so. Never have seen them towed away or a ticket on the car. Yes I have called it in.

At Walmart there is a fire lain all the way in the front of the building. This is the law where I live - it has to be there. It's also marked with a red curb and a bunch of no parking signs. There is ALWAYS at least 2 cars parked in the no fire lain. Now and then they will be right in front of the doors. The store don't phone the cops and no one cares that it's against the law. They know they won't get a ticket.

There are not many bike lanes here in Moose Jaw but the ones that are here you can't park in. In fact you can't even stop in them. Yet there is endlessly someone parked in them when we end up out in that part of the city.

I have had in one case someone park in MY personal parking spot (years ago) at my home. That is to say IN MY YARD. Well I called the cops and they came right away and had it towed. Here is the best part. Fucktard the wonder puppy comes to the door and asks Mom where his car went. HAHAHA. The look on his face when I told him I had it impounded was priceless.

We live in a city that had to put a small fence around a air ambulance landing pad to keep people from PARKING on the dang thing.

Speaking of the hospital. It is marked that you can't park for more than 20 minutes in the loading aria of the ER. Well people go in and just leave the car there for 6 or 10 hours at a time depending on how long they are in there. At one time I say someone park there then walk over to the front of the hospital to do in to see someone or have a test done - this to keep from paying to park. Yup... the friendly city...