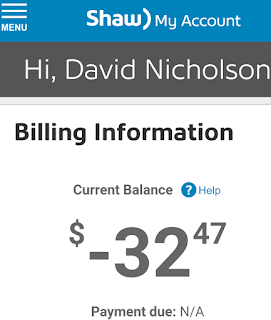 This is what it looks like when you get a good deal.

So I ordered a deal online with Shaw. It was for Internet 150 and BlueSky TV The deal for the first year is what I pay for just the Internet. Being that I am also getting HBO I will be paying $18 more a month than I was for internet for the first year. The second year I pay $48 more than I could normally for just the internet. After year 2 (end of the contract) I will be paying $63 more than just internet right now. I love this deal.


Now lets factor in that I no longer go for coffee almost every day with Cleaner Guy (ex-friend). That saves me about $50 a month on average. Being that I would have lunch at least twice in that time it's not about $70. So... By not going with Cleaner Guy I save enough to have cable again.


This time instead of the large package I got the small one. This gives me only channels that I actually like. I also (as I said) got HBO. I can watch all my faves first run and not have to wait a year for them to be on Netflix. I also get the shows that are NOT on Netflix and don't have to deal with the crappy low resolution 480p nonsense of Kodi streams.


So far I have about 1/2 the stuff I want to be watching set to record. The other 1/2 is not on this time of year and when it comes back on I will be setting it to record as well. The PVR will record up to 6 TV shows at the same time. You can also watch a TV show and record 5 others at the same time. The box also have voice control. Just push a button and talk to it.


The guide default is NOT just the channels you are subscribed to though. So I had to go to the bother of setting all the channels to favourite then setting the default guide view to favourites. But it's worth it as most of them I would see otherwise I am not subscribed to and I would be confused be it all. This way I can see just what I get.


Also I had to set the default zoom to OFF because I hate it when they stretch out an SD show to fit and HD screen. Some people (actually most) want the stretch thing to be happening. It looks strange and I don't like it. For some reason the default is 720p as well and I set it to 1080p.


I do however want to keep my Android Box set up for other things (won't need Kodi though). This requires me to get a HDMI slitter and there is one on Amazon for $13. It is automatic so you don't have to think - just turn on the device and there it is. Then I will have the Bluray and the Android Box on the same HDMI port as I only have 2 on this TV.


I know my last cable box did NOT like to be in the power bar. I will have to see how this one likes it. I will also be getting 2 new power bars that are better quality and handle more power. So they should do the job.