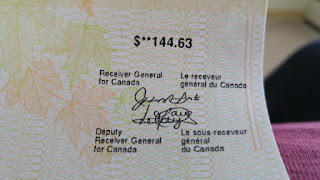 Well it came last week, but what the hell. I talked about this before but I will recap. So I was NOT the executor of my Moms will for legal reasons, a friend was. So he get this letter (almost 5 years after Mom dies) asking him if the estate is sill open or if not who to send a check to.

Well it's easy right, I am the only one who got anything in the will - so it would be me. Not so easy. I then get a letter asking me if I want the money and if so they will send me a form. OK so the form gets here and I fill it out and get it witnessed.

Well a long time passes and I wonder if the money is going to get here. So I phone them and they say "it's in the mail (literally)". Well skip forward 3 weeks and here is a letter saying "we sent you a check and it will be here within 30 days".

So here is the issue, sure this is money that they should have paid her in the first place, but... Think of how much handling this took. Think of how expensive that handling is. Now think of this happening thousands of times over the year. Also think that by this time they knew who I was and my S.I.N. so they could have literally just transferred it into my account. Nope had to be a check.

But at least I got the money and literally on the same day that I needed money to get something and I was out of money. BTW did you notice what was wrong with that last sentence?

Yup this is why we pay so much taxes. The system is literally designed to be inefficient. It seems every time they want to "reform how things work" they end up making it so there is actually more work being done by less people. This leads to mistakes like this one and all this handing to get me a small amount of money.

But this time next year pot will be legal and they will be taxing it and so on, so at least there is that.