May 25, 2017
Sleep is not my friend this last lifetime or so. Since I was ten I have had a problem with going to sleep. Since I was in my mid twenties I have had a problem staying asleep. It takes a very slight sound to wake me unless I am used to the sound. So something not in the spectrum of normal every day sounds will wake me up. Most of the time I won't actually know why I woke up because what made me wake is over by the time I am all the way awake.

The strange thing is, if someone else is in the apartment with me when I sleep, I will sleep deeper and better. Then again most people tend to be like this unless they are paranoid to some extent. I know when I moved back in with Mom for a time I slept better - then again it was dead quiet out in the trailer court.

Getting used to sounds that will occur often is not actually that hard for me. For example there was a train that went past at about 2 AM every morning when I was on South Hill. As well there was an after hours club on the next block and a lot of sound from the drunks until 5 AM or so. I got used to that in short order and slept threw it. But if someone had a strange and loud sounding car, awake I would be.

The ability to ignore sounds is a double edged sword though as I slept threw the phone several times. Most of the time it woke me, but if I was very tired it would not. This would drive Mom into a frenzy. Not to mention when I was sleeping at someone else's place for various reasons she would be worried as hell.

The new thing is pain waking me up all night or not letting me get a deep enough sleep. I have Fibromyalgia and CFS. They both end up in giving me pain most of the time. If it is a lot like it was last night I wake up often and have to move around in the bed or get up for a little while then go back to sleep.

Also being the size I am is not conducive to sleeping well as you tend to stop breathing for short times and wake up. The CPAP machine did literally nothing for me. I gave it two months and sent it back to them. It did not help me at all.

Speaking of that thing... When I sent it in I had it so I would be notified when it got there and I was notified. I also spent a fortune for insurance on it. The strange thing is, they never sent a letter to say they got it and so on. So ya know... It had a letter with it with all the information and so on and I did call them to say it was coming.

Any how, like when I am in pain - holding Pusheen (the little one) will settle me down some and I will be able to sleep for a short time. So on a day like last night I end up laying in bed playing with a stuffed cat for a while before going to sleep. I have no idea how this works, but she helps the pain and the sleep somehow. 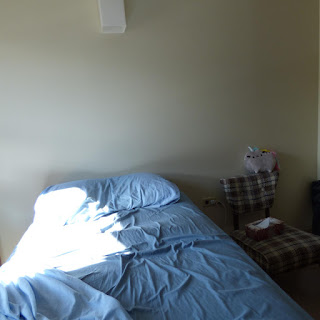 Light is an issue as well and there is a lot of it in here from under the door. There is a space of about 1/2 an inch under my door so that I can slide a "help stick" under the door if I need to. So it ends up letting in a lot of light. This light ends up shining right into my bedroom.

Well if I close the door to the bedroom then I have a problem sleeping (yes it's all in my head but I can't get used to it). Not to mention I have bad night vision and I won't find the door knob for a while and when you have to pee this sucks.

So the light issue is a no win. I have too much light or too little. Oh well.

Still most of the time I sleep like hell and am scrambled in the morning.

We have this sign we have to put out in the morning to say we are OK or they knock on the door. Well I end up being awake until 3 AM often so I put it out then and go to bed. I have to say when I do sleep I sleep very well here. In fact I have not slept as well as I do here in a long long time. Still here are many bad nights like last night with the body pain.

I have tried it all. Sleeping pills wake me up more so they are of no use. The strange one here is, if I don't get enough coffee in me that day I don't sleep hardly at all. If I drink it too late, I don't sleep at all. So it's a balance... I have also tried all manner of tea and over the counter aids and home remedies. None of them work. BUT the fan blowing on me all night seems to help rather a lot.

Anyway, if you know something I have not tried let me know in the comments. I'll tell you if I tried it. Have a good one and keep smiling.