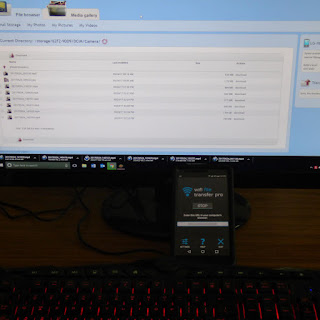 WiFi File Transfer App is our fiend. The thing will toss a bunch of videos off the phone in a lot less time than connecting it with the cord or even Bluetooth.

Literally the videos I tossed on the PC would have taken 25 to 30 min for me to transfer with the cable plugged in. Instead it was about 90 seconds. I got a cup of coffee came back and it was done.

I've got no idea if there is an Apple version of this. You will have to look it up yourself. As for Windows phones, I have not even seen one in person, let alone know how to do this on one. This is of course Android. The one I am using is the Pro at $1 ($1.38 CDN). It works on my tablet and on my Android Box as well. It does work from phone to phone or phone to tablet as well.

NOTE: doing this on a public WiFi is a risk as it opens a port that anyone can get into.

I gave it a rating of 5 Stars.