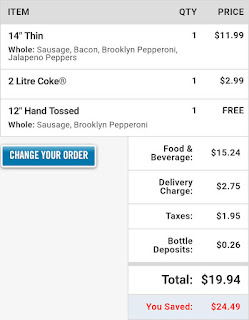 So my brain tells me I'm not fat enough and being that I just lost some weight, it's time to self destruct. I had $23 I could spend in my back account and wanted pizza. I wanted enough for tonight and some tomorrow so I wanted the large...

Well I then noticed I had a free one coming but it's a medium 2 topping. Wanting the large 4 topping I did some math.

I figured it all out. I did not have enough money left over to get the delivery charge next week for the free one. So I got it WITH the 4 topping large pizza.

So now I am sitting here hours later still full of pizza from the 2 topping medium that I did not finish and a large in the fridge. So this means pizza at least twice tomorrow.

This made all kinds of sense when I thought of the money end of this. At no time however, did I think "maybe I will save the free one for when I get paid". Sigh.

Nope now I will be full of carbs and after getting into candy and carbs this week already I'm up a but not DOWN. Sigh. So this was not needed at all.

My bid downfall is that I ended up with a bit of extra money this month and instead of getting something of use I spent it on treats. Lots of treats. All I can say is, this was NOT a good month for the diet thing. Then again last month kind of sucked as well.

I really need to get back into the right mind space here. I also need to walk a bit more than I been doing. I seem to be in a mood to hide inside my apartment and not go out. This needs to change as well. Tomorrow is supposed to be nice so I will go out and do some video in the park or something. That is after I become bloated with pizza. Sigh I can literally already feel the processed meat puffing me up. Well off to have a last cup of coffee.