What Is A Real Man? 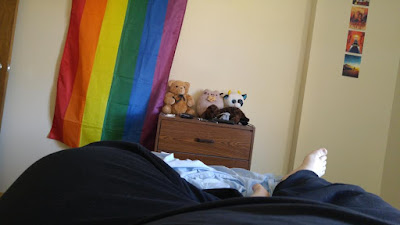 This here is what a real man sees when he wakes up in the morning. Stuffed toys and a pride flag. LOL well, at least the Mad Max collectors cards are manly... There is hope yet LOL. Oh and I like off roading and MMA. So...

Well I have a thing for Pusheen the cat. So the cat with the cookie is just one of 6 - I also have her sister Stormy in the living room. The bear was Moms and so was the dark brown dog. The cow was a gift from a friend. That friend is now dead. So there is a valid reason they are all there... Well OK the Pusheen thing is not rational at all, I'll give you that one.

I watch mostly action or horror films on Netflix. I watch a LOT of drag racing on YouTube. Not to mention MMA clips here and there when I can find one worth watching. Seems the rules have toned the sport down so much you have to watch outlaw stuff to get some action. I also watch movies and TV shows that make you think (more often than not). I watch things that are emotional as well.

I don't have just that one side to me. It goes deeper.

What the hell is a "real man"? Is there such a thing or is it down to individual perspective. Do we count the fake lumberjacks walking around with a beard and driving a 4x4 in town only? Do we count the stay at home dads who raise the children while the mother is off doing a job to put food on the table? How about the metro-sexual kind?

It's not an easy answer at all. Everyone is different. You are no less a man than anyone else if you like to watch anime and collect toys. You are no less a man if you raised your kids and did the housework. Not ever real man wears boots and so on. Some wear a dress now and then. Come to think of it, some real men where born with a Vagina. Just like some real women where born with a Penis.

Gender identity is down to the individual, not the masses. But I have to say my concept of this does not extend to men who would hit a child or a woman to feel power over them. That is NOT a man, that is a little boy in a mans body. The same goes for someone who would rape someone, that's not a man.

Maybe your perception is the problem. Maybe how you look at being a man - or for that matter a woman - is what we should be looking at.

that being said, don't expect me to believe your a cat in a human body... Or a freaking Elf... Just saying. I have my limits as to what I can accept as well. Peace - Dave :)