May 03, 2017
I know some are going to click for the title... Oh well. Anyways I been seeing people posting all over Facebook about how "Windows 10" is forcing people to use Edge and Bing. This is a half truth.

See "Windows 10 S" only allows you to use Edge to brows and only Bing as a search engine. The thing is, if you remember the Chrome Book with Chrome OS on it? Well this is the Microsoft version of it. The laptops start at $180 or about and online you can get a deal sometimes. BUT they run "Windows 10 S". Windows 10 allows you to set what ever the hell you want as a defult browser.

Here is where it gets slightly tangled. See, Edge in the normal Windows 10 has a setting to change search engines. The thing is there is no place to import other search engines and nothing but Bing to select. So you are stuck with it. I'm told there is a way to do it, but it's not apparent that is for sure.

You also might want to think twice about 10 S for the simple reason it runs almost nothing and you must get apps for it in the app store. There is no way around that. BUT if you just want to hit the net, type something up in word and play Minecraft then it's the thing for you and the price is right. Just don't expect to edit that vacation footage or actually have room for it on the hard drive. The things are basically a tablet with a keyboard.

If you are wondering the S stands for Student. It's meant to be a study tool and not a full functioning PC. I've read that several schools have handed them out to students to use. On the bright side, some perve won't be sitting at a computer some place looking at the web cams of students while they change and what not... As far as I could find, there is no way to install the tracking software that was used in that case. 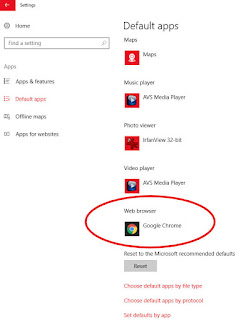 So to sum it up, calm down and actually look things up. Don't just assume that every site that puts out so called news is telling the truth and NOT trying to just expose you to advertising to generate revenue. BTW Chrome book only allows you to hit the web with Chrome... Same difference and no one lost their mind over it.

And here is a screen shot of my setting in Windows 10 Home. Note the default is Chrome... The best thing is, this was posted by 3 different people who do NOT use edge in windows 10 and they fell for it. Sigh. I mean, when you click a link in an email and it loads Chrome or FF do you not realize it's the default?