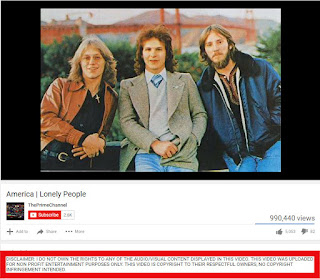 OK I have seen this on YT about 25,000 times. LOL. I am sure you did not intend to violate the law by breaking it Sigh... Ya know, this is like going into a store and handing them a disclaimer saying your about to shoplift but it's for non profit so it's all OK.

What I really love is all these big name tubbers with their top 5 or top 8 or whatever lists. They TAKE content that they do not own a copyright to and use it in the video. YouTube seems to be all kinds of fine with this if you are making 76,000 views per video or more on your crime. But I tell ya, if John Q posts a video with a 5 second clip of someone else's content POOF the bots get him. Not to mention doing a food review and you have to strain to hear the background music and Copyright strike.

Personally I have run into art that I have posted on the net here there and everywhere used as part of other content. Know what I do when I run into these? I share it on social media and say "hay look at the cool thing this person did with my work". Even had a couple of clips lifted from videos that where NOT set to be re-used show up in other's videos. Meh... I think the 3 times it happened I laughed my ass off as they where funny, shared it and moved on.

But in I am not losing anything. After all the record company has lost what? $15 or $20 from people listening to this song over the years? I mean they only make like a 1/2 billion a year, so they may go the hell under.

Did I mention that most of the people that listen to this stuff on YT will literally never buy a copy of the song? Yup it's been proven statistically over and over again that they actually lost very little from piracy. The vast majority of people who get a bootleg of something had never had any intention of paying for it. Strange concept ain't it?

But the cooperate masses seem to think that literally everyone of these people would have somehow magically payed for the content if things like this post or bit-torrent did not exist. It's like if we arrest ALL of the drug users all the sudden drugs will not be a problem any more. LOL - that's worked over the decades has it not? HA.

"I worked hard making that content I deserve to be rewarded". Thing there is, MOST people will buy the content. Thus the profits made by the record companies and all. Personally I enjoyed listening to this song. I also did NOT care that the quality was low and I will also not listen to it again for maybe 10 years. Why the hell would I buy it then?

I do actually have 4,865 songs on my hard drive. Guess what? I listen to them now and then and in the span of 3 or 4 months I will actually have listened to 75% of them. They are ALL songs I love and want to have a good quality copy off. They are ALSO either payed for off of Google Play Music or ripped from the original CD that I payed for in a store. So - so much for the idea that I won't ever give the industry a dime.

Now that being said, I know people personally who literally run bit-torrent 24/7/365 downloading massive amounts of stuff. The strange thing is with them - they seem to only view or listen to 10% of this content then it all goes onto a DVD or a Blu-ray and they never do anything with it again. It's a vast waste of time and money for blank media. I literally don't understand why they do this.

Guess who bootlegs most DVD's and CD's for sale on the internet? The Chinese. Have we ever thought of doing something about that? I have ended up twice with a bootleg of something. First time it was a DVD and it was an obvious low quality ripoff the other time was a Pusheen Stuffy that is sitting behind me. The seller has sold an unspeakable amount of these toys. Yet nothing is being done about them. Hell they where on Amazon for YEARS till they got the boot.

Yet the industry seems to want to go after the small people like some 15 year old girl who downloaded a bunch of music. Or that fellow who posted a cam video of a movie to the net. Frankly people who would bother to watch such a CRAP quality cam video are NOT going to go pay $19 to see a freaking movie in the movie house. I will give you that the cable industry is being hit hard by Android Boxes (if you look for it I review the one I own on this blog some place).

In my cast with the Android box, I literally watch 2 TV shows in Kodi. 2... Should I pay the $120 a month to have cable for 2 shows I want to watch? I tell you right now, if they make it a crime in Canada to use Kodi, I will stop using it's ass right away. I also got the box to watch personal videos on, stream netflix and several other services on my TV as I don't have a smart TV. I also will listen to local radio on the TV while I clean the apartment on it. And hay I play a couple of simple games on the thing when I have nothing better to do.

Literally every person I know has listened to music on YouTube. This includes COPS and I am down right sure it was not always VEVO posts they listened to. This is why thinks like Kodi are legal to use, it's not the viewer who broke the law - it's the one who uploaded it so some site... BTW did you know services like TED have a Kodi plugin you can use to watch Ted Talks? Kodi was designed in the first place to do things like that - it's the 3rd party plugins that give you the bootleg content.

So ya know by now I forgot my original point and went off on a tangent, so I will just end this post...