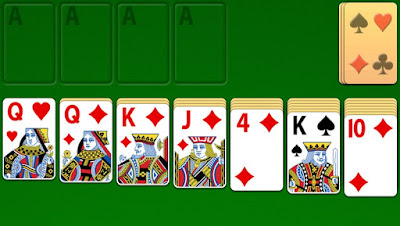 This is what I use all the power of my smart phone for LOL. Actually I have a 55% win rate, but as you see - NOT this time HAHA. I got about 3 turns of the deck and was done like dinner. This particular one has a "win all" mode and yes you can actually win all the games on it in that mode. Strange thing is I see in the reviews people bitching they turned it on and lost. Well the thing is, say move #6 you do A instead of B - poof you just lost - the ability to win the game was there and if you undo the shit out of it or "restart" the game you will win. I tried it one day and won 20 games in a row that way. Then I uninstalled and reinstalled to reset the stats and played it proper like.

Honestly it took my years to be able to play this stupid game (solitaire). See Dad messed it all up for me years ago. He used to play it some strange way when he was in his 20's for money. In the gambling version the game is over if you miss a play and the dealer sees you miss it.

Well he would at the first miss of a play sweep the cards off and say "you lost". Well after this happened several times I got very mad at him and yelled and cried - like small kids do. But this messed up the ability for me to EVER enjoy the game again until I was in my freakin' 40's.

Also tickling is torture and 80% of my childhood trauma is from tickling. I did not know to say STOP at the time. When I got old enough to be assertive and say stop Dad was taken aback. He would say "but you laughed" - thinking back it's an uncontrolled reaction to laugh. The fact that there would be tears in my eyes I guess he never noticed.

Strange thing is, the thing that should have scared me the most never did any noticeable damage to me other than a slightly uncomfortable memory.

See this youth pastor was a pedophile. He tried to get me to take off all my clothing one time and instead I ran home and told on him. Long story short rather than go to jail he ended it all. You would think that as a 9 year old that would have screwed me totally up. Nope.

So instead of pastor touchy messing me up for most of my life it was tickling. To this day if you try that shit to me I will tell you only once to stop and never do it again. If you do it again, I'm going to punch you in the face as hard as I can several times.

Some other minor messing me up came from a Mom who thought I was doing "bad things" and could never tell me what the fuck I was doing wrong. The fact that I was NOT doing anything wrong set in later in life and I realized my Mom was a bit crazy.

They fixed her after a few years of this shit though. So it's all good. I'm sure that alone would have ended up as a movie deal for some people, but not for me. I just moved on.

As for things in later life messing with me, watching Mom die a slow death left me scared for the rest of my life. There is now a hole where she used to be inside me. Nothing will ever fix this. Instead I just have to keep moving on. Still 5 years later I cry over it.

Well I'm sure something else fucked me up some, as I'm kind of twisted (in a good way mostly) - but I can't remember it. Then again, I can't remember what I did this afternoon - so... In 3 hours this blog will be a distant memory as well. Oh well - maybe I will forget I fucking hate being tickled some day...