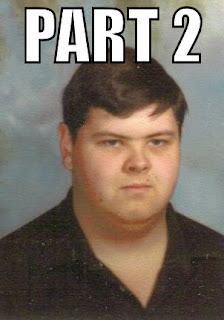 I was 16 and sitting in a dugout in the evening with someone I knew from school. Well I knew him from elementary school and he was going someplace else now. I am not talking about the kind of dugout that water goes in, but the kind the baseball players go in. We were having some beer he got somehow. I never did know how he got it. I knew that he was a strange kid when we were going to the same school, but I had no idea he was this fucked up in the head. We talked about fighting to start with, you know the bravado of the teen male, telling of the fights we got in in school back then. The on the 3rd beer (there were only 6) he started to tell me how he liked to kill animals with this knife he had and showed it to me. He said he liked to hear them scream and to see “the fear in their eyes”. He said he would like to do the same to a person some time. In fact, he had this plan to do it with hookers, but for some fucking reason they had to be blond. He said, “if I cut the clothing off and the pubes where not blond they would die slower”. He was not interested in fucking them, he just wanted to see the look in their eyes when “the light went out”. I just sat there in shock not knowing what to say. I just listened to him go on and on for about an hour. Then without a word he got up and just walked away. I wonder how lucky I was that he did not kill me. I wonder what happened to him. I saw his name in the paper a few times on the police blotter. He was charged with violent assaults on a woman both times. I think they got lucky because he was not very strong and a little person to say the least. Then there was nothing. I was told he moved to Alberta. I wonder if he ended up as a dangerous offender, locked up for the rest of his life. I guess I will never know.