And Of My Grade 7 Class 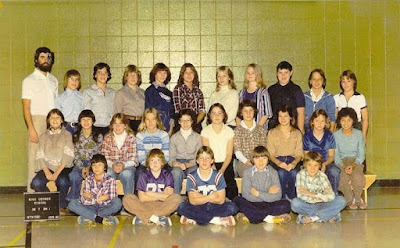 This is me at age 11. Back row 3rd from the right. When I was 9 I broke my back. I was in a body cast for a long time after that. Was kind of pudgy after that until my 30s then I put on the weight from having sedentary jobs - then a bit later on I went on disability and really put on the weight after that.

One of these people is actually dead now - in fact he did not make 1 more year after this. He shot himself in the head with his dads hunting rifle. How he managed that I don't know as he was rather short and at the time only 12. I never did know why, none of us did.

To most of my class mates, he was just not there one day. The teachers did not tell you such things at the time and I kept it quiet. My Dad had been the first cop on the scene. He was very disturbed by it knowing that I knew him. Can't say we where close, just kind of knew him.

One of these people also ended up in the Winter Olympics for figure skating. One of them has spent her life in the service of others with jobs at several non profit groups.

One ended in jail and not to into people who are NOT white... Sigh... Foolish racist bastard. But then again his Dad was just the same.

And one ended up hanging out with me until this very year. Then I for the first time realized he was not an actual friend but just using me to get things from me. When I asked him for a simple favour he got quite angry at me and that was it for us after 44 years. But I'm not bitter...

The rest I have no idea what happened to them - I never saw any of them after the next year from when this was taken.