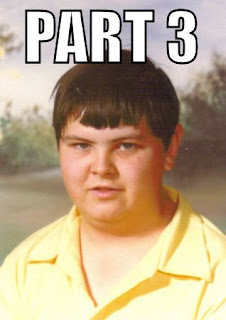 School days in King George where kind of a mix of good and bad times. There were a lot of kids going there from broken families and a lot of damaged goods. They liked for the most part to cause trouble and to push people around. I was always a big kid and they left me alone after I started to push back. But I know others were not so lucky. But the fondest memory was of the lady who worked in the library. She was the nicest person you could hope to meet. She also showed me that there was more to this world than just what is in it. If we opened our minds and just let them wonder, we could be in worlds we created. She is one of the two major reasons I started to do art. She is the reason I started to try and put words to paper, even though I was never that good at it. We had conversations; something that I did not get out of other adults at the time. I honestly think she is the reason that I stopped being an ass hat and started to apply myself. She is why I ended up a good person. I was in the wrong crowd to start with. God knows where I would have ended up. Well I know because that is why one of the two friends I talked about earlier is dead. He died at the hands of another gang member in Winnipeg Manitoba. One of the other reasons I became a productive person instead of a drug addict or a criminal is that he moved and the other friend and I started to stop wanting to smash shit and be a general waste of space. But that librarian was the number one reason I started on the path to who I am today, even if I did divert off the path a few times in my twenties.