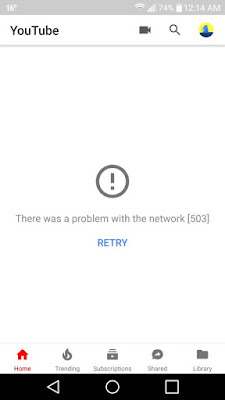 Well this is what keeps popping up on my phone when I try to use the YouTube app on my Android phone. Being I'm not alone, it's not my phone. Others have the issue.

It's NOT all the time though and during peek hours it seems to work fine. That makes even less sense as on off peek hours less people are using it.

Also not everyone is getting it to happen. But there is nothing new with that now is there?

After all, a bunch of us are getting unsubbed from other people over and over again and losing a bunch of subs every 2 months like clock work. Yet others have not had this happen at all.

As well some of us don't get the front page to load on off peek hours on the browser either. So I don't know... And in the Studio App I now and then will hit like on a comment and it will then ask me if I really want to mark it as spam... Well NO. I know the buttons are side by side, but I am going out of my way to only hit the one.

Then there was the time that it up and made public millions of private and unlisted videos for no reason what so ever. Just did it one day. This happened to 2 people I know of at the same time.

We can't forget when it suspended about a 200,000 people for no reason as well - just deleted their accounts and told them they had multiple or serious violations of TOS. Sigh... Best part is half of them had not one video on them...

I tried the "new format" as well a while back. WOW did I not like that. Seems you can't block someone from their channel like you used to be able to do when you see them being a twatt to someone else. As well it did not actually work well to say the least - I know it's beta BUT if you are giving me night mode, don't switch it OFF 1/2 way threw a video.

And how many times have you had the player just NOT want to play someones video. Normally it will be just that one video all day long and if you come back 2 days later still won't play. Yet 300 other people watched it just fine in that time.