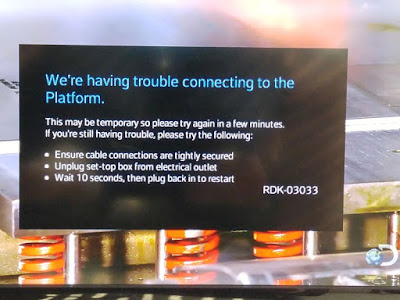 I think there might be something wrong with the feed in this aria because I get very short drops in internet and glitching on the TV screen every now and then. I have tweeted them about it and they keep telling me they don't see any errors in the logs and what not. So I don't know.

With the WiFi I can very much see something getting into it, but I'm on a channel literally no one else in my building is on - I have walked around with the analyzer looking to see who is on what channel. Most of them at in the middle and I'm on the far end. There is only 1 close to mine and he is very low signal. So I'm guessing it's NOT someone in the building.

There are a couple of towers in the aria so it could be something transitory like a packet being tossed. But this should not get into the TV. Then again the TV in hocked to the internet as well, so there is a slight possibility of something outside getting into both.

It's often at night between 8 pm and midnight Sask time. Sasktel, Rogers and the City have things transmitting in the aria - the city would not be at that time of night, not here and not in the band needed to get into the modem. So perhaps one of the two phone providers. But that should not be an issue if you think about what bands they are using.

There was in the last place something that transmitted at exactly 9:03 pm every single night. A short packet that would make my speakers buzz on the computer - it was the only thing it got into thank God. See cheep speakers have no real filtering on them and are often a magnet to RFI. That I know was coming from Sasktel but could not be the issue as for the frequency it was on (we found it with a scanner one night).

So unless the church next door is transmitting something in the late hours of the evening I am left with the Rogers tower to blame. Thing is, I have the 2.4 ghz side turned off to cut on interference. About 85% of RFI that gets into your modem and causes drops in speed and loss of connection are on that band. A lot of things get into it including cordless keyboards and so on. So unless you have old tech that needs 2.4 - just shut that puppy off and be more happy.

Now this is at best a slight bother and not actually effecting my world in a negative manner, but I would love to find it's ass just to say I know what it is. In any event, I will more than likely never know. It also could actually be the lines in the aria or to my building as well. It seems to effect the public WiFi in the lobby as well - so it's not just mine.