Play The Victim Then Spew Hate 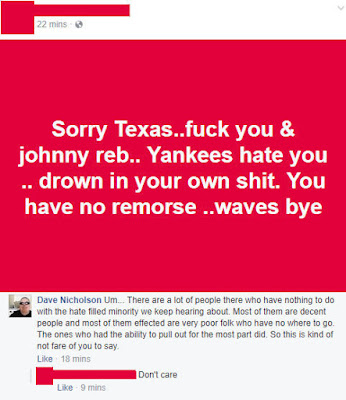 How is this for asshole? I just had to delete the 3rd person in a week for being filled with hate. This person should know better. She is always on about how people treat her like shit. Sigh.

You can't fix hate. So I just walked away. When you don't care that good people are hurting and suffering and at risk of death - there is something wrong with you that nothing can fix.

I find it interesting that every last person I have ever encountered that spews hate at random for little to no reason all play the victim as well. Every one of them with no exception. Makes me wonder if it's a mental illness driven over compensation of the poor me syndrome.

The sad thing is the amount of others I have seen on Twitter and Facebook spewing hate saying it's punishment for voting for Trump. Ya know I have my doubts about the competence of anyone who voted for him, but once you think they should die for it - you are just evil.

Then there was the mega church crap. People going on how they closed the doors to keep out the people in need when in reality the place was under water and the video was faked by atheist trolls.

That in it's self make me go back to what I just said - the people that spew hate the most often are the ones who think they are a victim some how and who more than people who think that someone believing in God somehow harms them.

Oh and the person who posted this proclaims to be a Christian at times. Then again she is so confused as to what and who she is, it's not even imaginable to most people. All I know is that when people spew hate I walk away. I'm not going to argue or try to fix them - I'm just walking away and I won't be back.

The thing is I've never seen anyone who is prone to viral like this come to their senses and start being a nice person. Yes I'm sure it's happened but almost never and I have personally not seen it.

In any event I'm off to lay in the dark for a bit and pray for people who are effected by this disaster. I know some of you think that is a pointless waste of time and perhaps you are right, but I can do that - I can't donate money as I have none and I can't go and help. So I will pray and wish that they are safe. At least that is a positive thing to do.